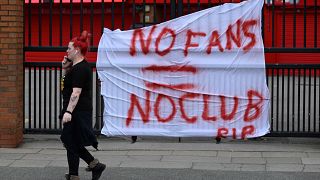 Fans boo Real Madrid on their arrival at their hotel in Cádiz, where they are due to play their La Liga match. The Cadiz team will be wearing anti-Superliga shirts.Florentino Perez is the president of FC Real Madrid and the lead on the proposed European Super League. The European Super League project is collapsing. Only Real Madrid, FC Barcelona and Juventus are still strongly committed to the project, after the six English teams, 2 of the 3 Italian teams and Atletico Madrid have announced their exit from the project.

Signs slamming Liverpool owners' decision to join the European Super League are posted around the club's Anfield stadium. Principal owner John W Henry apologised for his part in the proposed Super League, which lies in ruins after a mass pullout from Premier League clubs. The withdrawal by Liverpool, Manchester City, Manchester United, Arsenal, Chelsea and Tottenham Hotspur, just 48 hours after proposals were unveiled, followed a furious reaction from fans, officials and politicians.