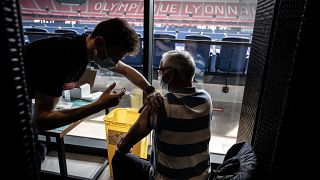 Scores of people waited outside a French football stadium to get vaccinated against COVID-19, as the government steps up inoculation efforts after a slow start dogged by delays and logistical problems.

There were long lines outside the Groupama Stadium in the east-central city of Lyon after the city's first division football club opened its doors to assist in the vaccination campaign.

Jean-Yves Grall, director of the regional health agency in Auvergne-Rhone-Alpes, said vaccinations will be carried out at the stadium over the next five days.

With a new virus variant spreading fast and French intensive care units as full as they were last April, the government closed all schools and imposed new rules taking effect nationwide on April 4.