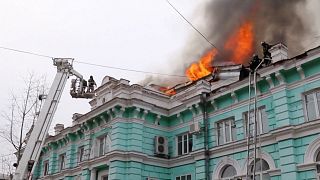 Russian doctors successfully performed cardiac surgery under extreme circumstances in the Far East city of Blagoveschensk as a fire was ravaging through the hospital, the country's Emergencies Ministry informed.

The fire hit the cardiological hospital on Friday morning, sweeping through an area of 1,600 square meters. It was qualified as most serious, 59 firefighters were engaged in the operation.

While staff and patients were evacuated from the two-story building, a team of eight doctors continued to perform heart surgery, including a coronary artery bypass graft. At the same time, fire and rescue units did everything possible to prevent fumes and blazes from infiltrating the operating room.

The fire was extinguished at 2:24 p.m. Blagoveschensk time (0524 GMT). According to preliminary data, an electrical malfunction caused the blaze. No one was injured as a result of the fire.