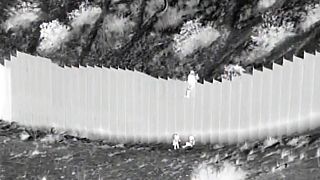 Video released Wednesday by U.S. authorities shows two Ecuadoran children being abandoned by smugglers after they were dropped over a 14-foot-high barrier along the U.S.-Mexico border.

U.S. Border Patrol agents found the toddler and her 5-year-old sister and they were transported to a nearby Border Patrol station for medical evaulation. Both children were "medically cleared", according to a statement from U.S. Customs and Border Protection, and for now remain in the care of U.S. Border Patrol.

The incident comes as the Biden administration struggles with finding space to house the several hundred children and teenagers who are crossing the border daily. In some cases, parents refused entry into the U.S. have sent their children across the border alone, hoping they eventually will be placed with relatives. As a result, holding facilities are packed and the administration is scrambling to find more temporary housing.