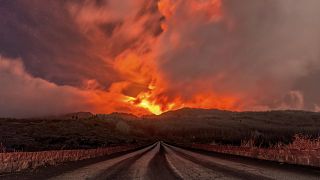 Italy's Mount Etna, Europe's most active volcano, is at it again.

Lava was thrown into the air as it exploded on Wednesday (March 10) morning, the 11th major eruption in the past few weeks.

Etna is the largest of Italy's three active volcanoes, which also include Stromboli and Mt. Vesuvius near Naples, which last erupted in 1944.