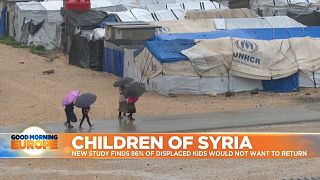 Displaced Syrian children have 'lost connection' with own country

Displaced Syrian children have lost connection with their country of origin.

Save the Children conducted a study of 1,900 displaced children and their caregivers inside Syria and across Jordan, Lebanon, Turkey and the Netherlands. It has found the vast majority can’t imagine a future for themselves in the country. After ten years of war, 86% of Syrian refugee children said they would not want to return.