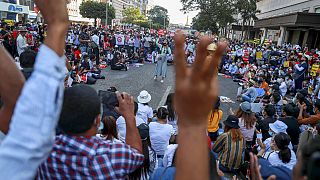 Thousands of people in Myanmar have called for power to be handed back to civilian chiefs in a mass rally in Yangon.

Protesters have called for Suu Kyi's release from house arrest. She was detained on charges including allegedly breaking COVID-19 rules.

Meanwhile, military generals have deployed troops in major cities, sparking growing concerns about the potential for violence on the streets.

Brigadier General Zaw Min Tun, the vice-minister of the ministry of information, said both Suu Kyi and President Win Myint are "in good health".

"We are keeping Daw Aung San Suu Kyi and U Win Myint at a safer place for their security," he said. "They are in good health. It's not like they were arrested. They are staying at their houses. We will continue according to the law. We will proceed in accordance with the law. I would like to say that we are not going to go beyond the law."

Buddhist monks marched through the streets of Yangon, to the applause from residents of apartment blocks and onlookers. The presence of monks among the ranks of the demonstrators will help bestow moral authority on the protest movement, in a country where the vast majority are Buddhists and still deeply traditional.