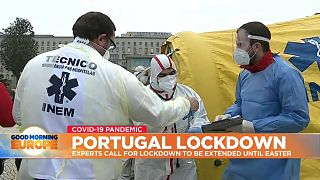 Portugal urged to extend its national COVID-19 lockdown until Easter

Health officials in Portugal are recommending the country should extend its current lockdown measures until Easter.

Its COVID-19 infection rate has dropped sharply after January's national restrictions were brought in, but it is still recording the most daily deaths in the world by size of population.

Portugal's parliament is expected to lengthen the state of emergency decree — which allows the government to impose the current lockdown — beyond Sunday through to March 1.

"While the measures are producing results, it's clear that the current lockdown will have to be extended at least through February, and then we'll reassess it," said Portugal's health minister Marta Temido.

The seven-day average of daily deaths in Portugal is the highest in the world, at 2.05 per 100,000 people, according to Johns Hopkins University.

A study suggested that sticking with the lockdown, and keeping schools closed, through the end of March would bring down the number of COVID-19 intensive care unit patients to around 300. There are currently almost 900 in ICUs, which are under severe strain.

Experts noted, however, that it could take weeks before a reduction in the number of infections lowers the number of hospitalisations.

Portugal has officially recorded more than 770,500 cases of COVID-19 and attributed more than 14,500 deaths to the coronavirus.

Meanwhile, the coordinator of Portugal's vaccine task force, Henrique Gouveia e Melo, said a shortage of vaccines is "strangling" rollout efforts. But the country has begun inoculating around 15,000 firefighters, who commonly operate ambulances.

The health ministry also says antigen tests will be more widely used at schools, factories, and other places where people gather as part of a new strategy to contain the pandemic.