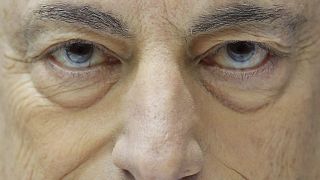 Can Italy's disparate parties realign themselves under Mario Draghi?

Former European bank chief Mario Draghi is moving closer to becoming Italy's next Prime Minister as the biggest party in Parliament - the 5 star movement - votes on whether to give him their support.

Salvini's League party and the Democratic party have already given their backing.

Last week, President Mattarella mandated Draghi to find a solution to a political crisis caused by the collapse of Giuseppe Conte's coalition.

Cecilia Sottilotta, Assistant Professor of International Relations and Global Politics at the American University of Rome says it's difficult to believe these very diverse parties are actually coming together.

"It's problematic though, in terms of credibility, as all of these [parties] sudden change course and rhetoric - particularly Salvini's party - and it's not entirely convincing," she says.

"There's this incredible trust and confidence in Draghi's ability to navigate this complex political landscape. I think all parties will seize the opportunity to realign themselves and are preparing for the next electoral campaign."

Watch the report in the media player above.