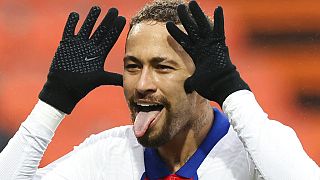 Clubs in France's top football league have been handed a financial lifeline after a deal was signed to broadcast their games until the end of the season.

After COVID-19 lockdowns deprived them of supporters at matches, payments for TV rights then dried up last year.

Mediapro, who had agreed to pay €780 million per season over the 2020-2024 period, missed payments in October and December. That led to an agreement to dissolve the agreement, leaving Ligue 1 without a broadcaster.

But now French broadcaster Canal+ has stepped in.

It has paid €35m for exclusive rights to screen Ligue 1 and 2 games between February 12 and the end of the 2020-21 season, reports AFP news agency. This sum is in addition to the €332m per year it was paying to broadcast 20% of Ligue 1 games.

"It's a short reprieve," sports journalist Michael Kurn told Euronews. "This deal is only going to go until the end of the season.

"These broadcast rights are such a lifeline to these football clubs and it's been such a difficult 12 months for them."

**Watch more of Kurn's analysis in the video player, above. **