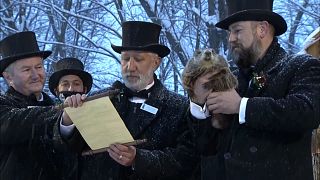 There will be six more weeks of winter, Punxsutawney Phil predicted as he emerged from his burrow on a snowy Tuesday morning to perform his Groundhog Day duties.

There will be six more weeks of winter, Punxsutawney Phil predicted as he emerged from his burrow on a snowy Tuesday morning to perform his Groundhog Day duties.

Members of groundhog Phil's "inner circle" woke up the furry critter at 7:25 am at Gobbler's Knob in Punxsutawney, Pennsylvania, to see whether he would see his shadow or not.

The lore goes that if the groundhog sees his shadow as he did this year, there will be six more weeks of winter. If he doesn't, spring comes early.

A club member announced, "We have all passed through the darkness of night, but now see hope in morning's bright light. But now when I turn to see, there's a perfect shadow cast of me. Six more weeks of winter there will be."

Because of the coronavirus pandemic, revellers weren't able to see Phil and celebrate in person. This year, it was all virtual and included cardboard cutouts to represent spectators.

The livestream from Gobbler's Knob, a tiny hill just outside Punxsutawney about 65 miles (105 kilometres) northeast of Pittsburgh dates back to 1887.

The annual event has its origin in a German legend about a furry rodent. Records dating to the late 1800s show Phil has predicted longer winters more than 100 times.

In its 135-year history, Phil has predicted winter 106 times and spring 20 times, the club said. Ten years were lost because no records were kept.