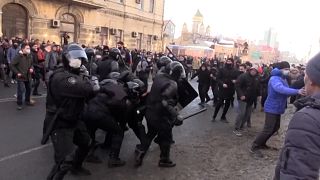 There are some 60 planned protests on Saturday in cities.

Navalny was arrested on January 17th when he returned to Moscow from Germany. He had spent five months there recovering from a severe poisoning.

Turnout is likely to be high for the afternoon protest planned in Moscow, which the city's mayor and other authorities have warned people against attending.