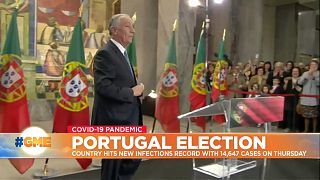 The polls predict an overwhelming victory for current president Marcelo Rebelo de Sousa, supported by the centre-right and the Christian-democrats. President Rebelo de Sousa also has the unofficial support of the general secretary of the Socialist Party and prime-minister António Costa.

Currently, the socialist party rules the country with a minority government, supported by agreements with the left parties, but lost the support of the left in the last budget vote.

José Palmeira is a professor of Political Science at the University of Minho in northern Portugal:

"I think that for the Socialist Party, it will be interesting if, despite everything, Marcelo Rebelo de Sousa does not have a great result so that he does not feel so reinforced, because this may cause an imbalance in the power relations between the presidency and the government," he said.

But with Portugal going through a new national lockdown, there are fears that turnout for the presidential election on Sunday could be even lower than in previous elections.