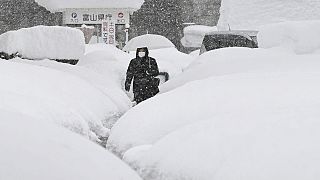 In Central Japan's Fukui prefecture, more than 100 vehicles were reportedly seen stranded by the highway.

Conditions were so hazardous that Japanese military forces were called in.

Weather officials had warned that some areas could expect three times more snow than usual.

The Japan Meteorological Agency warned of further traffic disruption due to snow and frozen roads.

It said heavy snow was expected from northern to western regions on the Sea of Japan side of the country through Monday morning.

Transport and traffic were also at a standstill in Toyama prefecture with cars getting stuck, the snow also caused damage to electricity lines.

Heavy snow warnings are still in place around Hokuriku region.