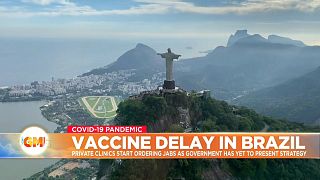 As countries around the world push forwards with their immunisation campaigns, Brazil’s health ministry has yet to deliver details of its national vaccination plan. So far, only the state of São Paulo has given a date to start inoculating its residents: January 25.

Brazil is home to the most severe COVID-19 outbreak in Latin America. The country trails only the US as a global virus hotspot with 8 million cases registered and over 200,000 deaths.

As the rest of the world starts to picture what life will be like once the pandemic is over with the start of vaccination campaigns, Brazilians have yet to be informed about when they will get a jab - and how.

Brazil has one of the best immunisation programmes in the world and a robust pharmaceutical manufacturing capacity. In the past, it has led the way in containing outbreaks of yellow fever, measles, and other pathogens. So, many had high hopes that Brazilians could be among the first in the world to be inoculated.

But political disputes, chaotic planning and a nascent anti-vaccine movement have left the nation with no idea of when they might get relief from the virus.

Brazil’s President Jair Bolsonaro, who tested positive for COVID-19 - twice - last year, has called it a "measly flu" and dismissed calls for quarantines and lockdowns. Bolsonaro also told his supporters a coronavirus vaccine could kill or disable them, without offering evidence.

"My feeling is that of disgust. The president of the republic is an example for millions of people. Especially in an era of social media where his words spread so quickly. And even if he says these are 'only' his opinions, as an authority, he must be conscious of his role," said Dr Alexandre Telles, president of the Union of Doctors of Rio de Janeiro.

"It’s disrespectful that the president has an attitude like this one in the midst of this pandemic. We hoped for a minimum of commitment. All we got is an omission. He didn’t negotiate the vaccines. There aren’t even enough syringes or needles in the country".

Last week, Bolsonaro tweeted news that the Ministry of Health had suspended the purchases of syringes because of the high prices asked by manufacturers. In the tweet, the president also said that states and municipalities had sufficient stock to begin vaccination against COVID-19.

Dr Telles also said the rise in the number of new cases of COVID-19 is already being felt in hospitals in Rio de Janeiro - and around the country, especially since “end-of-year parties where people gathered and didn’t follow social distancing rules”.

"We had a time in Rio where we had over 500 people waiting for hospital beds. We’re going back to that," he added.

"Brazil was never able to flatten any curve. Not even the first curve. And because lockdown measures - which had the support of institutions such as the Fiocruz- were never adopted, we are very worried. We can’t find it normal that 1,000 people die every day. We can’t find it normal that there are 200 people waiting for a bed in a hospital in Rio de Janeiro. For me that already is a failure," Telles told Euronews.

The coronavirus pandemic has brought Brazil’s public health system to its knees.

As the number of cases rose again this month, leaving hospitals in several cities running low on beds for critically ill patients, pressure from increasingly concerned regional authorities mounted on the federal government.

According to Gonzalo Vecina, the co-founder of Brazil’s Health Regulatory Agency, the country’s health ministry - currently run by an army general with no medical experience - "doesn’t have a concrete plan to vaccinate the Brazilian population". Vecina says many local governments have asked what they should tell their constituents about such a critical vaccine.

The state of São Paulo took the lead and negotiated its own deal with China’s Sinovac.

The CoronaVac vaccine will start being distributed to the 46 million residents of Brazil's most populous and affluent state from January 25. The first group to be vaccinated will include healthcare workers, indigenous people, and quilombolas communities. Elderly people aged 75 and over will be vaccinated from February 8.

And on Friday, the Brazilian health minister finally announced the government had agreed to buy up to 100 million doses of CoronaVac. But he hasn’t given set a date to start inoculating people yet.

While millions of Brazilians wait, those with money to spare may be able to get their hands in a dose faster than the rest. Private clinics are reported to have started closing their own deals abroad.

"It may look like good intentions, but they are commercial intentions. Whoever is doing this is trying to sell vaccines, and make money in the process," said Vecina.

"We are a capitalist economy and making money is not forbidden. However, in this capitalist economy, there is a federal law - the Constitution - that says that 'health is a right of the people and the obligation of the state,' something to be achieved through public policies. At this moment we are discussing passing people with money in front of those who don’t have it. In the midst of a global pandemic, this is immoral," he said.

Immoral, and bad news for Brazil’s healthcare personnel who say they are bracing for a difficult few more weeks - or even months.

"The word that defines many colleagues today is 'exhaustion'. Many lost loved ones, many fell ill... many of our colleagues died. And when we lack medicine, or when we lack the tools to provide adequate care to our patients…" Vecina told Euronews.

"During the pandemic, we were faced with the lack of antibiotics, lack of anesthetic so that we could carry on certain procedures… sedatives for patients that are placed in respirators. And that’s extremely frustrating. We were trained to give the best possible treatment to our patients - we want the best. We can’t accept that what is happening here is normal".

Our International Correspondent Anelise Borges is in Rio de Janeiro. Watch her full report in the media player above.