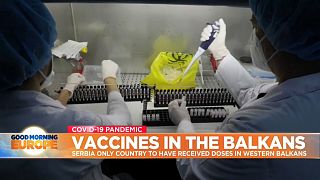 Serbia is only Balkan nation to have started inoculating its citizens

Citizens of countries like Bosnia and Herzegovina, Albania and North Macedonia are disappointed at the slow progress which will keep them locked in and their economies locked down.

"What is deeply disappointing for me is that we in Bosnia Herzegovina are expecting to begin vaccinations only in the spring. I think this is shameful, we have to correct this as soon as possible, and I wish to call upon all authorities in this country to amend and correct this historical shame."

Albania and Kosovo have both secured half a million doses of the Pfizer vaccine, but so far Serbia is the only country in the region to have started inoculating its citizens. Supplies of both the Pfizer and the Russian developed Sputnik V vaccine are not enough to roll out mass vaccination programmes.

Many Balkan nations are pinning their hopes on Covax – a global procurement programme set up by the World Health Organization to secure vaccines for poorer countries.

The EU has designated 70 million Euros to Balkan countries to help them gain access to a COVID-19 vaccine. And 13 of the bloc’s foreign ministers from eastern nations which border the Balkans have also called on the Commission to offer them some of their vaccine supplies – they said that Europe will not be safe until its neighbours have also purged themselves of the virus.