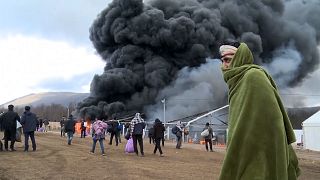 A huge fire hit a much-criticised migrant camp in northwestern Bosnia and Herzegovina on Wednesday.

People were seen running away from the Lipa facility near the border with Croatia.

No injuries were immediately reported.

It was home to around 1,200 migrants, the majority hoping to make it to the European Union.

"As far as we know now, a group of former residents put three tents and containers on fire after most of the migrants had left the camp," said the International Organization for Migration's chief of mission in Bosnia, Peter Van Der Auweraert.

Bosnia has become a bottleneck for thousands of migrants hoping to reach the European Union. Most are stuck in the country's northwestern Krajina region as other regions in the ethnically divided nation have refused to accept them.

The Lipa camp has been widely criticised for its awful conditions. Authorities failed to connect running water or electricity and it was planned for closure.

Prior to the blaze, the EU feared that the announced closure of the Lipa camp would make things worse, even though living conditions there are deplorable. The camp was only set up as a temporary measure to cope with the impact of the coronavirus over the summer.

The first snow this month triggered alarm about the upcoming winter as migrants in makeshift tents appealed for help in freezing temperatures. Many have also alleged pushbacks and violence at the hands of nearby Croatian police.