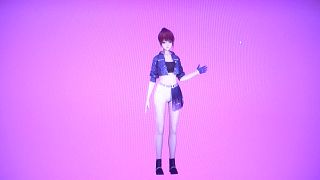 On Saturday "Amy" won a breakthrough virtual talent show in China, where computer-generated entertainers perform in front of real-life judges and tens of millions of online viewers.

Amy found fame on "Dimension Nova", which claims to be the world's first talent show bringing together digital performers to dance and sing in front of three real-life celebrity judges.

Although the virtual idol concept originated in Japan, these digital avatars are now stealing airtime in China, where they appear on TV shows, billboards and even news programmes.

The virtual stars in the show are created by a mixture of computer animation and actors - Amy's clothes, hairstyle and appearance are created by animators, before her human actor takes on everything else.

Real-time motion capture and rendering technology mean as the human moves it is reflected by the on-screen idol. To prepare for Amy's performances, the actor had to take extra dance training.

But creators avoid all mention of the existence of the actor behind the idol.

Instead of showing the actor, the show runs footage of animators anxiously waiting backstage, as if they were the performer's family.

Video-sharing website Bilibili reported a 200 per cent increase in viewing hours of its virtual idol live streaming channels in the first ten months of this year.

But some experts worry that if too many companies pile in on the market the quality could suffer.

Since virtual idols live and die through the strength of their technology, the risk of embarrassing technical failures is high.

In one awkward show appearance, only Amy's cap appeared onstage.

Other performers have disintegrated mid-appearance after technical breakdowns - including one contestant who froze when he tried to teach the judges kung fu.