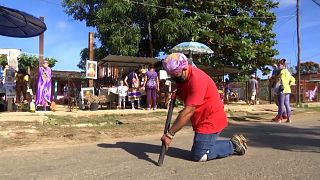 Thousands of Cubans go to the shrine of San Lazaro every year but with the economic hardship due to the pandemic, the annual ritual had a special resonance.

The island closed its borders, crushing the tourism industry, and has been subject to heavier US sanctions.

Believers in face masks crawled for several kilometres to reach the shrine on the outskirts of Havana and asked for support and good health in the coming year.

San Lazaro is considered a Catholic saint but has been embraced by many practitioners of Santeria, the Afro-Caribbean religion that is widely followed on the island.

The saint is known as the disciple of healing and the sick in the Orisha tradition of Santeria.