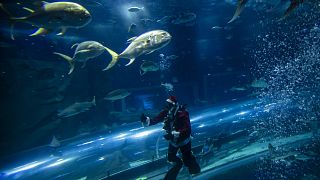 Santa Claus swam with the sharks at the Aqua Rio Marine Aquarium during their daily fish feeding session on Monday in Rio de Janeiro.

As aquarium staff fed the sharks and other marine life in the 3.5 million-litre water tank, Santa Claus, Mrs. Claus and two elves joined them inside.

Volmer Salvador, the diver who dressed as Santa Claus, said that "we come to bring some happiness, not only for the kids but anyone who believes in the Christmas spirit," during difficult times.

Children of all ages enjoyed the surprise, waving at Santa Claus through the glass tank.

Santa's scuba diving will continue through to December 25 during the sharks' feeding time.