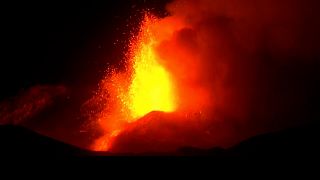 Giant orange fountains of lava could be seen in Catania, a city on the Italian island of Sicily.

Although volcanic ash clouds can cause flight disruptions, the nearby Catania airport was operating normally on Monday.

Authorities reported no danger to the towns that dot the mountain's slopes.