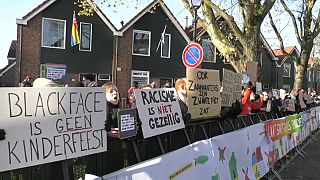 Dutch wrestle with the Christmas tradition of 'Black Pete'

This weekend, Sinterklaas - a legendary figure akin to Santa Claus - will deliver presents to children in Belgium and the Netherlands.

For many children, the arrival of Sinterklaas is the highlight of the year. Traditionally, he has been accompanied by a Black helper named "Black Pete" - a relic of the Dutch slave trade in the 17th Century.

This character is often portrayed in real life by a person wearing blackface - a historical practice that dates back around 200 years that refers to when someone (typically with white skin) paints their face to resemble a Black person, which is seen as racist and many people find deeply offensive.

But this old custom is has raised objections and protests among those who want Sinterklaas' black-faced assistants to disappear as soon as possible.

One of the key figures in the protests against Black Pete is Akwasi, a famous Dutch rapper and poet.

“The Black Petes are inferior to the big Sinterklaas. They have black faces, it is well-intended, but it belongs in a Museum. It is part of the past, not of today,” he said.

“It’s not only about black paint but also about red lips, about curly hair. It’s really about stereotypes. People have no idea how offensive it is. Or they see it as a tradition that has to stay like it is."

The City of Amsterdam asked an expert on Sinterklaas, Pam Evenhuis, how to the modernise the tradition.

“In Amsterdam, there are roughly around 120,000-150,000 children. Only around 40% are white, Caucasian. Sinterklaas is for everybody. If people are disturbed by the presence of Zwarte Piet, we should change it,” he said.

To end these stereotypes for good, Evenhuis rewrote the story of Sinterklaas, coming up with the idea of "Chimney Pete" to replace the character. The new tale became a success and his idea was adopted by many.

"In 2014, don’t forget that over 90% of the Dutch population didn’t want to change Black Pete. And nowadays, especially thanks to the influence of Black Lives Matter this year, in five or eight or 10 years, I am assured that, or Sinterklaas is assured, that everybody will love Chimney Pete and we will just call him Pete,” Evenhuis added.