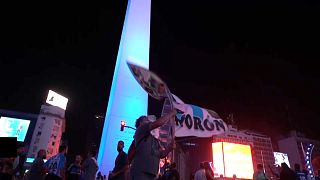 Hundreds of fans could be seen at the city's Obelisk monument, singing anthems and lighting candles for the World Cup winner, who died on Wednesday of a heart attack.

He died two weeks after being released from a hospital in Buenos Aires following brain surgery.

The office of Argentina's president said it will decree three days of national mourning.