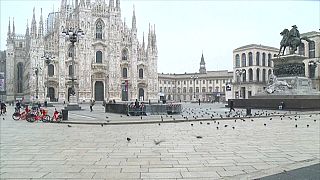 The pandemic has taken its toll on all of Europe's economies with the closure of businesses, rising unemployment and spiraling debts. One of the worst-affected countries is Italy.

In an attempt to cushion the financial impact of nearly 50 thousand fatalities and more than a million infections, the cabinet has approved an economic stimulus plan for next year.

It’s a “maxi budget”, one that Italy’s parliament will have to approve by the end of the year. It is going to cost more than 38 billion euros, although the figure might increase as the plan will be revised in the coming weeks.

Healthcare is where the extra spending is going.

Measures to support struggling businesses and to save thousands of jobs are at the centre of Italy’s fiscal plan. 5.3 billion euros will be allocated to fund furlough schemes as well as a two-month extension to a ban on dismissals which was due to expire in January. In line with the new approach to public spending, the budget plan also includes tax breaks aimed at getting more women back to work and also to encourage youth employment.

But as Italy is the country that is set to receive the largest share of the European Union’s recovery fund, a part of these resources will be used to tackle some of the long-standing issues widely seen as holding back Italy and its economy.

15 billion euros worth of grants from the EU will be invested mainly in green policies and to make the country more digital and innovative.

Prime Minister Conte described the funding as a way to build a better Italy, although the allocation of resources will very much depend on how capable national governments are at outlining how they actually intend to spend the funds.