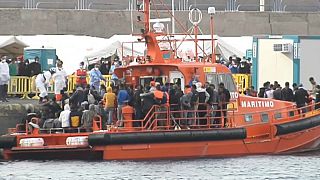 More than 1,600 migrants have either been rescued at sea or reached the Canary Islands in small boats over the weekend, according to Spanish emergency services.

About 1,000 arrived on Saturday alone, setting out on about 20 barely-seaworthy boats.

The body of one person who had died during the perilous journey was recovered by rescuers in waters near the island of El Hierro. Another person was airlifted by helicopter to a local hospital for an unspecified health problem.

The route to the islands from western Africa, which at its closest point in Morocco is 100 kilometres away, has seen an increase in traffic this year. The EU funded Morocco in 2019 to stop migrants from reaching southern Spain via the Mediterranean Sea.

According to the Spanish government, more than 11,000 arrivals have been recorded in the Canary Islands this year compared with 2,557 during the same period last year.

The Atlantic route has become the deadliest seaborne path to reach Europe with more than 600 confirmed dead of missing people, according to the U.N. Refugee Agency.

Arrivals in 2020 are still low compared to the 30,000 migrants who reached the islands in 2006. But they are at their highest in over a decade since Spain stemmed the flow of sea arrivals to just a few hundred a year through deals with West African countries.