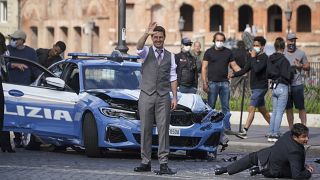 Tom Cruise was in action on Monday (October 12) shooting the latest Mission: Impossible movie in Rome.

The Hollywood star and castmate Hayley Atwell were filming on the city's famous Fori Imperiali boulevard, which lies between Piazza Venezia and the Colosseum.

The scene revolved around a car chase with a black BMW M5 and several Italian police cars, in addition to a motorcycle and a special forces police truck.

Cruise appeared in good spirits, smiling and waving to cameras.

The new Mission: Impossible, the seventh of the saga, is directed by Christopher McQuarrie and is expected in cinemas in late November 2021.