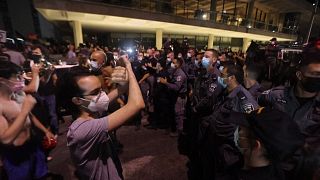 The protesters gathered in clusters close to their homes, an attempt not to violate pandemic measures that limit movement within one kilometre (0.6 miles) of a person's place of residence.

In Tel Aviv's Habima Square, several protesters were arrested. The reasons for the arrests were not immediately clear.

Police often went into the crowd of protesters, checking their identification documents to establish where they lived.

Mounted police were also deployed in Tel Aviv to help contain the protests.

Netanyahu has been the target of weekly demonstrations outside his official residence in Jerusalem since the summer, with protesters calling on him to resign over his trial on multiple corruption allegations and his response to the pandemic.

Earlier this week, Israel's parliament passed a law that would allow the government to curtail public protests during the lockdown, as Netanyahu's critics accused him of trying to muzzle dissent.