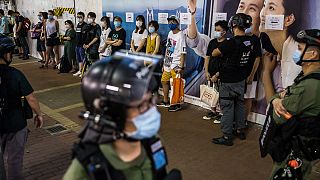 At least 90 people were arrested Sunday at protests against the government’s decision to postpone elections for Hong Kong’s legislature, police and a news report said.

Sunday was meant to be voting day for the city's partially elected legislature, one of the few instances where Hong Kongers get to cast ballots.

But the city's pro-Beijing leader Carrie Lam suspended the polls for a year -- citing the coronavirus -- angering the pro-democracy opposition who had been hoping to capitalise on seething anti-government sentiment.

Throughout the afternoon police were heckled by people shouting slogans such as "Give me back my vote!" and "Corrupt cops!" as officers conducted multiple stop and searches and ordered crowds to disperse.

The Hong Kong government condemned the protesters' "unlawful and selfish acts" in a statement issued on Sunday evening.

Beijing has initiated a widespread crackdown against its critics in Hong Kong after the financial hub was rocked by seven straight months of huge and often violent pro-democracy protests last year.

On Friday, UN rights experts warned the broadly worded provisions in the legislation posed a serious threat to political freedoms and the right to protest.

Under a deal agreed with Britain ahead of the 1997 handover, authoritarian China agreed to let Hong Kong keep certain liberties and autonomy for 50 years.

Critics say that deal has been demolished by the security law and the increasingly intense crackdown on the city's democracy supporters.

Beijing denies freedoms are being eroded and portrays the anti-government protests as a western-backed plot to destabalise the mainland.