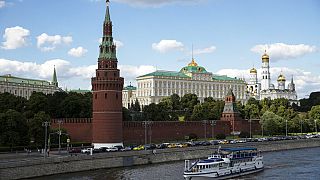 Moscow says it has not seen evidence Navalny poisoned with Novichok

A Kremlin spokesperson says Russia hasn't received any evidence from Germany that opposition activist Alexei Navalny was poisoned with a Novichok nerve agent.

President Vladimir Putin's representative brushed off allegations that the Kremlin was involved in poisoning him, accusing Germany of not providing Moscow with any evidence about his condition.

German authorities said Wednesday that tests showed “proof without doubt" that he had been poisoned with a chemical nerve agent from the Novichok group.

British authorities identified the Soviet-era Novichok as the poison used on former Russian spy Sergei Skripal and his daughter in England in 2018.

But Kremlin spokesman Dmitry Peskov insisted Thursday that Russian authorities still had not received any evidence from Germany to back up their allegation.

“We haven’t received any information so far," Peskov said. “We hope that it will happen soon and will help figure out what caused the condition the patient is in right now.”

German Chancellor Angela Merkel on Wednesday called Navalny’s poisoning an attempted murder that aimed to silence one of Putin’s fiercest critics and called for a full investigation.

“There are very serious questions now that only the Russian government can answer, and must answer,” Merkel said.

Russia is standing firm — Putin will not answer Merkel's questions until it receives more information from Berlin, Peskov said.