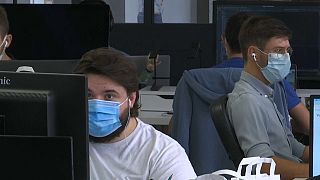 Coronavirus France: Millions return to work and school in masks

The first of September normally marks a return to normality in France.

But this year's "rentrée," or "re-entry" is, of course, proving to be unusual.

The COVID-19 pandemic is on the minds of many as new regulations go into effect for offices and schools.

Infections are still surging in over 20 French departments. Indeed, public health authorities reported over 3,000 new cases on the last day of August.

The number of new infections rocketed by almost 50 per cent that month.

"The epidemic is gaining ground so we must intervene now," Prime Minister Jean Castex told reporters recently. "Something is happening since this summer in France and elsewhere, that the scientists have not modelled or foreseen."

The government has mandated that face masks are to be worn in schools and offices.

Officials say it will help limit the spread of the virus, which has an R rate over one in most parts of the country.

Authorities have provided few exceptions for companies. However, TV presenters and reporters are allowed to forgo covering their faces while on-air.