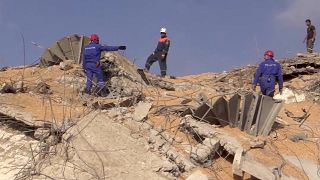 A Russian search and rescue team in Beirut has unearthed three bodies under the rubble near the city's port, three days after the deadly explosion that killed more than 150 people.

Russia has sent five planes carrying medical workers, teams from the Emergency Ministry and humanitarian aid to Lebanon to help with the aftermath of the explosion.

"The group of rescuers in the first shift is working at the locations pointed out by the (search and rescue) dogs, they are widening the gaps between the concrete slabs to see what can be done," said Igor Akmayev, the head of the Russian rescue group in Lebanon.

Meanwhile, the makeshift hospital set up by the Russian team at a stadium near the explosion site said it had treated 12 people since Thursday.