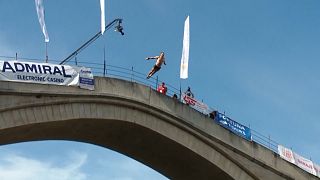 The spectator numbers were well down on previous years — 2,000 attended this year compared to the tens of thousands that usually gather at this unique location on the Neretva river.

Just 33 competitors from three countries — Serbia, Montenegro and Bosnia — took part this year in both the leg-first and head-first competitions.

The COVID-19 pandemic prevented many world-class divers from travelling to Mostar, but it was important for the competition to go ahead, according to its organisers, so that the tradition was not interrupted.

Its origins stretch back 1664, just after the Old Bridge was originally constructed.

Vedad Basic and Igor Kazic took the honours on Sunday. Basic won the prestigious head-first category with straight "10" scores from all 7 judges on the panel.

Kazic took the prize in the leg-first class, after what was described as a "long deliberation".

Both winners expressed regret that the crowd was significantly smaller this year because of the pandemic, but said that it was important that tradition was upheld, even in the most difficult of circumstances.