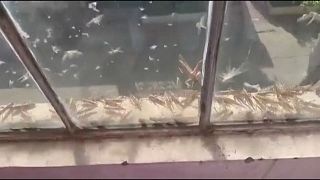 They are a continuation of 2019’s outbreak in Africa and the Arabian Peninsula, according to Pakistani media reports.

Residents in the city of Jaipur filmed the skyline of the city filled with the flying insects.

The desert locust is considered the most dangerous migratory pest in the world.