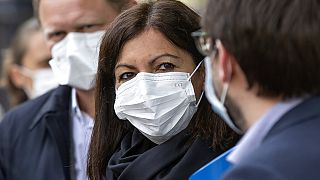 Paris’ mayor clashes with government over reopening of parks

Paris mayor Anne Hidalgo has clashed with the French government over her pleas to reopen parks and gardens in the French capital.

The city was at the epicentre of the country's COVID-19 outbreak and lockdown restrictions are being eased slower there as a result.

Hidalgo said: "It is absolutely necessary that we are authorised to reopen parks and gardens, not for picnics, but so that Parisians can go for a walk,"

Paris, she added, had many small apartments and any new freedoms would be conditional on everyone wearing face masks, she added.

But her demand was rejected by France's health minister Olivier Véran.

"No, we're not reopening parks and gardens in Paris or the Ile de France (the region around the French capital)," he said. "If we don't respect, collectively, social distancing then virus infections will go up again."

Hidalgo's request came after Parisians were seen gathering in public spaces drinking, embracing and sharing food - despite the government urging people to maintain social distancing to limit the spread of the virus, as many shops are allowed to re-open.

The French government fears that with the warm weather’s that’s expected to arrive soon it could lead to hundreds of people yet again going to outdoor places, breaking social distancing rules and the infection rate going up as a result.

France's death toll from the COVID-19 reached 26,991 on Tuesday, overtaking Spain's 26,920 as it recorded 348 more deaths in the previous 24 hours. France has thus became the world's fourth worst-hit country in terms of deaths, after the United States, the UK and Italy.

21,595 COVID-19 cases in the country are currently hospitalised, among them 2,542 in intensive care; that latter figure is a reduction of 170, consolidating a downtrend reported since April 8th.