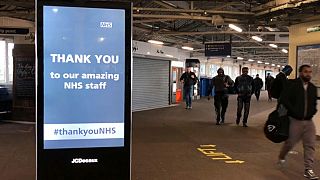 The loosening of lockdown restrictions specific to England come into play from today – causing major disparities with the rest of the UK.

The government is encouraging people in England who cannot work from home to return to their occupations - but to avoid public transport. Facemasks in public places have also been recommended.

The government has faced some criticism that it is people in the lower-paid occupations who are being asked to face the greatest risk. The opposition Labour Party has said that the new guidelines are confusing. Police leaders have commented that advice for people to avoid public transport is “unenforceable”.

The advice to stay at home remains in place in the rest of the UK – Scotland, Wales and Northern Ireland.

Scotland's First Minister Nicola Sturgeon had said that the coronavirus is "in retreat" - but that the "risk was still too great" to consider easing the lockdown yet. She said that, despite the recent fall in the death toll and intensive care admissions, the progress that Scotland had made was as yet tentative and a premature loosening of restrictions could allow the situation to re-ignite.

The UK's central government has also announced a UK-wide extension of support for workers in furlough because of the pandemic. UK Chancellor Of The Exchequer Rishi Sunak said 7.5 million jobs had already been supported by the scheme, in which employees can receive up to 80% of their pay to a maximum of £2,500 a month. The Treasury has said that nearly one million companies have sought government help to retain jobs, claiming more than £10 billion.

Sunak told British MPs there would be "no change" until the end of July but "more flexibility" from August onwards, including the possibility of bringing back part-time workers.

Businesses would also be asked to share the cost of salary support to maintain current levels of assistance.

Sunak's statement came after speculation that the scheme would be gradually reduced.

The London-based Institute for Fiscal Studies think tank said the extension of the scheme in its full form for the whole of July would cost another £10 billion, taking the total cost to about £60 billion since it was launched in March.