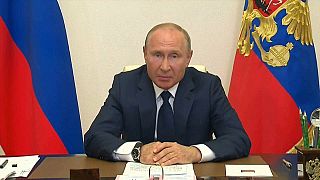 Russian President Vladimir Putin's decision to end what he describes as the "non-working period" is drawing sharp criticism from his political opponents.

Putin said on Monday that orders to remain at home would end this week for most of the country’s workforce, despite a record increase in new coronavirus infections.

With more than 230,000 confirmed cases and consistently more than 10,000 new coronavirus cases per day, Russia now ranks third in the world behind the United States and Spain.

Tuesday's figures saw Russian health officials put the total number of infections at 232,243, with around half of the total cases in the capital, Moscow.

Putin’s critics say the reopening is being driven by financial concerns and isn't supported by the scientific data. They're also accusing the Russian premier of trying to shift responsibility onto regional authorities.

Dimitry Gudkov, leader of the opposition Party of Changes said Putin’s actions were motivated by trying to save money and shift blame.

"It’s all as if Putin had nothing to do with it -- he withdrew this responsibility from himself."

The Kremlin introduced the measures in late March, saying Russians not working in essential jobs should remain at home but still receive their salaries as part of comprehensive measures to halt the spread of the virus.

The move brought further uncertainty to an economy already dealing with low oil prices and with business owners struggling to pay full salaries to employees while shutting their doors to customers.

President Putin said that Russia's regions, which were given powers to introduce varying measures to deal with the pandemic, will be able to keep in place any restrictions they considered necessary to contain the virus.