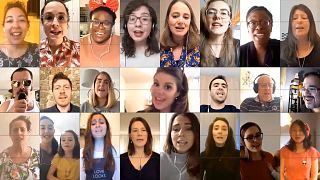 As the continent is under lockdown, orchestras and choirs have had to get creative to keep practising and performing.

Strict measures have restricted the movement of people in France since the country was locked down in mid-March.

The Lyon International Choir is a 60 strong group of ex-pats who meet each week in France’s second-biggest city.

They had planned to perform a series of “Greatest Rock Hits” at the Hard Rock Café but their concert was cancelled because of the restrictions in the country.

Instead of abandoning their music practice, they decided to go digital to keep rehearsals running and spirits high.

To create their video performance of Queen's Don't Stop Me Now, the members recorded selfie videos singing each part for the final montage. Frédéric Glas, who sings with the bass section spent a few days at home stitching all of the videos together.

The founder of the choir, and host of Good Morning Europe, Rosie Wright, said “It has provided so much entertainment and excitement to put this video together. The choir provides a real community for each member and we were determined to keep singing.”

She added: “It was a bit of a logistical headache to put the parts together, our pianist Samuel recorded the music, I then sent a video of myself conducting to the choir members and they sent their final versions back.