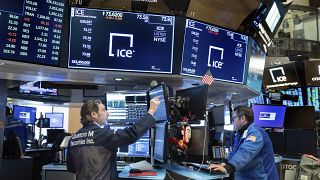 What will be the economic impact of the COVID-19 pandemic?

As countries close shops, borders and beg their citizens to stay at home, the global economy is looking less healthy by the day.

The Dow Jones in New York closed down 4.5 per cent on Friday, capping off Wall Street's worst week since 2008. A global recession is now a real possibility; central banks worldwide have slashed interest rates to record levels.

And increasingly, people are finding they have no more job to go to.

Saadia Zahidi is a managing director at the World Economic Forum. She told Euronews a quick recovery depends on the actions governments and employers take today.

She also said more coordination is needed, more along the lines of what happened following the financial crisis in 2008.

But there could be a silver lining, she added.

"I think there are quite a few people starting to predict that we might see some fairly major structural changes in the future [linked to this crisis]," she said.

"So much more remote working, much less business travel and some long-lasting impacts on carbon emissions because of that."