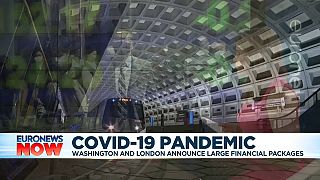 Major packages aimed at helping businesses and families have been announced by both the British and American governments.

President Donald Trump unveiled an aid package for the US that could be worth a trillion dollars. Money will be sent directly to American homes to boost family finances. It's not yet clear how much cash will be sent or to whom, but the US Treasury Secretary Steve Mnuchin announced action would be taken as soon as possible:

"We're looking at sending cheques to Americans immediately. Many companies have now shut down. Americans need cash now and the President wants to get cash (to them) now and I mean now - in the next two weeks."

The move, together with a package of tax cuts, was welcomed on Wall Street, where stocks staged a moderate rally after days of prolonged decline.

In London, British Prime Minister Boris Johnson said that small businesses would be the main beneficiaries:

"We must act like any wartime government and do whatever it takes to support our economy."

Lockdowns and shop closures across Europe mean that economies are under pressure to an unprecedented extent. A package of measures worth 200 billion euros was also announced in Spain. But Analysts are saying the slowdown is worse than the financial crisis of a decade ago. And despite the European Central Bank, the Federal Reserve and the Bank of England reducing interest rates to near-historic lows, there is concern about the likely impact on markets, households and jobs.