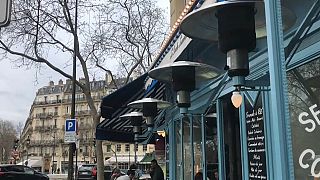 A green mayor in Paris has fired up a debate about the environmental impact of heating the French capital's popular outdoor terraces.

Since indoor smoking bans were introduced in 2008, more customers are opting to enjoy meals and drinks outside regardless of the weather. To keep customers warmer, many restaurants have installed gas and electric warmers.

Jacques Boutault, mayor of Paris' second arrondissement, says it is time for Paris to pull the plug on the heaters.

“The inside of the café, it’s empty – and the terrace is basically full,” Boutault told Euronews. “This a bit absurd that there’s nobody inside in the winter.

“If we want to reach our goals to reduce carbon emissions or be carbon neutral, we need to get cities involved.

"If Paris wants to have zero emissions in 10 years' time as it has promised then it needs to begin by stop using pointless energy like these heaters."

Thierry Salomon, from alternative energy association Negawatt, says a 75-metre-square terrace emits around 13.7 tonnes of carbon dioxide if it is used for 14 hours a day from mid-November to mid-March. He says that is the equivalent of what a new car would emit if it went around the Earth three times.

On the other side of the argument are smokers and restaurant owners who say income from their terraces are a big part of their earnings. One told Le Monde that revenue on his terrace accounted for 80 per cent of total sales.

Rennes, the capital of Brittany, banned all outdoor heaters on 1 January and some bar owners have reported a drop in custom.

Cutting off the heaters in Paris is just an idea for now and municipal elections later this month will decide if it stays on the city's agenda.

**Your view | What do you think? Do you believe outdoor heaters should be banned or are they an important part of city life? Let us know in the comments, below. **