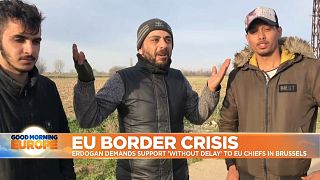 The migrant crisis on Europe's doorstep is no closer to a resolution. Turkey's President Recep Tayyip Erdogan has met with the EU's top officials to demand more support for his country 'without any further delay'.

Erdogan called on his NATO partners to show solidarity to Turkey. He also said that the 3.6 million Syrian refugees living in his country are not just Turkey’s responsibility but also Europe’s.

Von der Leyen spoke about past disagreements between the EU and Turkey at a press conference after the meeting which was attended by herself and Charles Michel, her counterpart at the European Council, but with the obvious absence of Erdogan himself.

Thousands of people remain at the border and at least for now unable to go any further.

Watch Anelise's report in the player above.