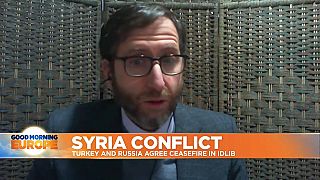 Security expert believes Erdogan may have 'overplayed hand' over Syria

An international security expert believes that Turkish President Recep Tayyip Erdoğan may have overplayed his hand in the current Syrian conflict and migrant crisis.

Michael Tanchum's comments came after President Erdoğan and Russian President Vladimir Putin announced a ceasefire in Syria's northwestern Idlib province, which became effective from midnight on Friday. Russia has been supporting the Syrian government, while Turkey has backed the opposition.

Tanchum, a Senior Fellow at the Austrian Institute for European and Security Policy, told Euronews that there are strict limits to the Russian-Turkish relationship:

"On the other hand, those who thought that the conflict between Turkey and Russia would push Turkey into the arms of the west were also mistaken," he added.

At the announcement of the ceasefire in Moscow, President Erdogan said:

"During this process, Turkey will reserve the right to retaliate with all its might, anywhere in the field, in the event of any attack by the (Syrian) regime.

"The establishment of a new status in Idlib became inevitable following the saddening incidents that occurred due to the regime's aggression against our soldiers." he continued.

The two countries' foreign ministers added that the agreement also envisages setting up a 12 kilometre security corridor along the M4 highway south of Idlib. The corridor will be jointly patrolled by Russian and Turkish troops, beginning from March 15.

President Putin said he and Erdogan reached agreement on a joint document during talks that lasted for more than six hours.