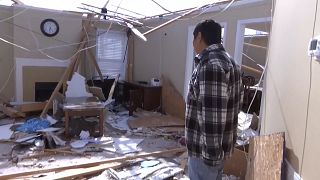 Tornado survivors clung to furniture to avoid being carried away

Survivors of a deadly tornado that hit Tennessee said they clung to each other and furniture to stop the winds from carrying them away.

Eighteen of them, including five pre-teen children, died in Putnam County, some 80 miles east of Nashville. At least 88 more were injured.