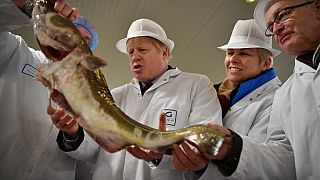 Post-Brexit fishing rights up for debate between EU and UK

Tense post-Brexit trade negotiations between the UK and the EU have begun and one of the most contentious topics is fishing rights.

There's big questions to answer over who can fish where – and how much.

The British government has touted their man goal as "taking back control" of UK waters. Current EU law allows fishermen to use the waters of other member states under the Common Fisheries Policy.

Industry leaders in the UK have long complained that puts them at a severe disadvantage.

“EU fleets fish about six times as much in UK waters as UK vessels fish in EU waters so it’s unbalanced," said Barrie Deas from the National Federation of Fishermen's Organisations.

The EU wants to keep the current arrangement in place but London is demanding yearly negotiations with Brussels to narrow down rules about who can fish where.

Cabinet Office Minister Michael Gove spoke on the issue at length in the House of Commons recently.

"Our fishing waters are our sovereign resource, and we will determine other countries' access to our resources on our terms," he said.

The fishing industry is worth approximately 1.7 billion euros to the UK's economy – which only accounts for around 0.1 per cent of Britain's GDP

Fishermen in northern France are threatening to obstruct the sale of British seafood if they can’t cast their nets in UK waters.

“If we go to war, it’s quite obvious that the British would lose out on the European Market," said Olivier Lepretre from the regional committee of Maritime fisheries. "They would not be allowed to sell their produce in France.”

Nearly a year and a half has passed since French and British boats rammed each other in a confrontation dubbed the Scallop War.