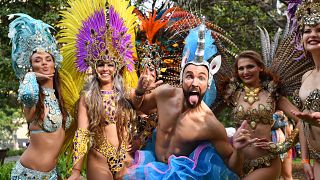 Thousands of people in bold and sparkling outfits gathered in the centre of Sydney, Australia on Saturday for the annual LGBT Mardi Gras parade.

Organisers estimated that more than 12,000 people took part in the event, which featured nearly 200 creative floats.

Participants in colourful outfits were seen singing, dancing and rollerskating down a central street.

A group of rugby players stopped to entertain the crowd by building a human pyramid.

Many participants carried placards and banners to promote messages of equality, social justice and protection of the environment.