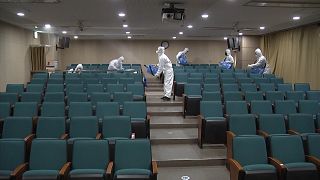 Officials were scrubbing down the Songpa District Cultural and Sports Centre in Seoul, which will be closed until 31 March, after the government announced that cases have been confirmed in the area.

In South Korea, the virus has spread with an almost 15-fold increase in reported infections in one week, making it the second country with the most cases detected so far.