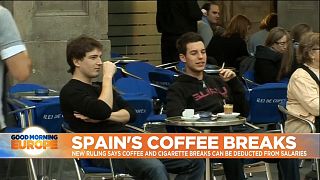 Should workers have pay deducted for coffee and cigarette breaks?

A worktime break for coffee or a cigarette could hit Spanish employees in the pocket.

The country's high court has ruled in favour of GALP, a Portuguese petrol company with a presence in Spain that began deducting time for employees that spent time off the premises. It included breaks for coffee or a cigarette.

"What will be next, discounting time for bathroom breaks?" asked economist Javier Diaz Gimenez, a professor at IESE Business School and an advisor to the Ministry of the Interior.

He said the controversy had its origins in the Spanish government telling companies about a year ago to begin recording the daily work hours of employees.

Gimenez told Euronews it was intended to solve the problem of employees doing overtime but not getting paid for it.

"This has ended up playing against the workers themselves," he added. "Because what certain companies have decided is to discount the time of the breaks instead of better organising the day of their employees."

An appeal has been filed against the high court's ruling.

Mari Cruz Vicente, secretary of Trade Union Action, claimed the ruling did not comply with the legislation.

Firstly, the requirement to record work hours only asks for start and finish times to be noted, not when breaks are taken, she said.

Secondly, if companies want to change their employees' work hours, they have to first be negotiated, Vincente added.

YOUR VIEW | What do you think? Should workers be penalised for taking breaks? Or is it fair for companies to only pay employees when they are working? Let us know your opinion in the comments, below.