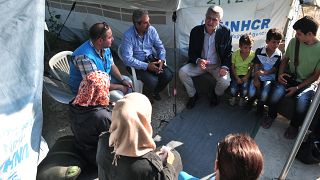 Greece will set up new camps for asylum seekers on its Aegean islands, hoping to end months of overcrowding and violence within its resettlement scheme.

The new camps will allow asylum seekers to go out during the day, but they will be locked at night.

Over 40,000 asylum seekers are currently in Greece, according to recent estimates. The new camps will be designed to accommodate 20,000 refugee seekers who will be limited to a three month stay within the camps.

"The announcement by the government to create new camps and set new procedures are welcomed," Philippe Leclerc, UNHCR Representative in Greece**.** "We all want to get rid of a situation which is totally disastrous for the persons who are living today and for months in overcrowded conditions. "

The Greek government has worked to acquire additional land for the camps in Lesbos, Chios, Samos, Kos and Leros. They expect them to be operational by the middle of the year.

Greece has struggled to house all of its migrants in proper sanitary conditions. Rights groups and the Council of Europe have classified the situation at the camps as "explosive" saying they needed "dire" help.

Greece closed a number of camps in October 2019 after a series of fires and other violet incidents.