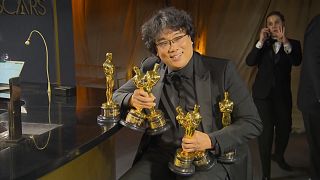 The Oscar engraving bar was overwhelmed by Bong Joon-ho and his "Parasite" team Sunday evening.

The South Korean director arrived at the star-studded Governors Ball with six trophies, including best director and best international feature.

He rubbed shoulders with the great and good of Hollywood at the event, including best actress Renee Zellweger who joked that she needed to make some room at the bar to fit all of the film's trophies.

Brad Pitt and Laura Dern scooped the supporting acting awards for their roles in Once Upon A Time in Hollywood and Marriage Story respectively.