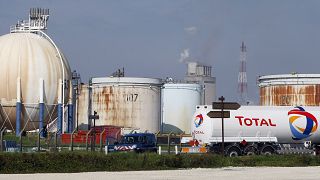 French oil giant Total will be taken to court this week in Nanterre by a combination of NGOs and local authorities.

The goal is a substantial reduction in its greenhouse gas emissions.

'A business model incompatible with the Paris agreement'

It is the first such case against a private company in France.

“Total is a French company, a major carbon emitter in France. It is emitting more gas emissions than the whole of the rest of the French territory and it has a business model which is clearly incompatible and inconsistent with the goals of the Paris agreement," says Paul Mougeolle, a lawyer representing Notre Affaire à Tous NGO in the case.

“We want Total to make an energy transition and we want them to do renewables and non-carbon energy,” Mougeolle adds.

Under a French accountability statute called 'duty of vigilance', the methods that large companies utilise in order to ensure there is no damage to the environment must be clearly stipulated.